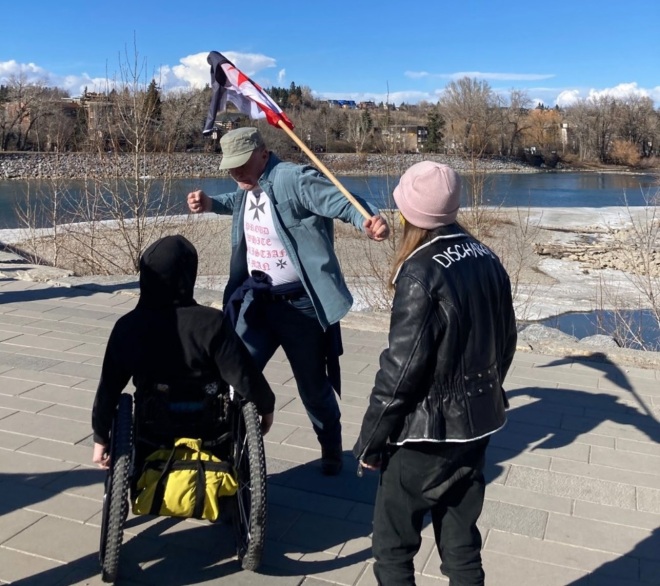 About five years ago, Terry Helm had a workplace accident at a job site in Toronto.

“Unfortunately, somebody had removed a barrier that day and didn’t tell anybody about it,” he said. “I was cleaning up at the end of the day and just happened to step back into a hole where I took a 21-foot fall.”

“It ultimately resulted in my paralysis and being in a wheelchair,” said Helm.

The accident has affected his life in quite a few ways changing his outlook and allowing him to slow down and take stock of the world around him.

“Most people would expect a negative impact but honestly, other than the fact that things are a little bit slower, and I have to ask for help to reach the top shelf life is the same as it was, truthfully, “said Helm.

At first, his situation felt life-shattering when he was still in the hospital doing rehabilitation.

“Even the first couple of months out, it really was, but thankfully I had an excellent support system,” he said. “My wife, my family, everybody within the music scene helped immensely show me that I’m still human, I’m still here.”

Soon enough, he realized he could still do everything he could do before; he just had to figure out new ways to do the things he loved.

“At that point, I basically stopped feeling sorry for myself and moved forward,” said Helm.

Being involved in the Waterloo region punk scene was one of those things that he had loved before he broke his back, and it provided excellent support for his recovery when he returned to it.

“It gave me something else to focus on other than my accident and recovery,” said Helm. “I was in and out of the hospital, physio, this doctor or that doctor. I had nothing to take my mind off of it, and then once I got back into the music scene and started promoting shows again, especially once I started up my band, it just gave me something else, and it showed me that things aren’t any different.”

He felt like he was half a person before he got involved in the punk rock scene again.

“I lost what I knew,” said Helm. “It took that community support to show me that wasn’t true.”

Oddly enough, the name of his band Back Breaker came into existence before the accident.

“I was a structural steel ironworker working for the union in Toronto,” he said. “I mean, let’s get real, it doesn’t matter what job you do, work is work, and it’s gruelling. People lose their lives, and people end up in my situation. People lose their jobs and can’t pay for things anymore, so it was a salute to the working class at that point where you are going to work every day to break your back so that you can get by. Then I broke my back, and it  became literal.”

It’s not easy to wrangle four-plus band members, juggling people’s work schedules and responsibilities, and it took Helm time to find members who believed in the lyrics he was writing and didn’t just want to stand there playing guitar in the background.

“That was also a huge part for me to find others who believe the same things because unless you believe those things, why are you even involving yourself,” said Helm. “Generally, our message is anti-fascism, anti-racism, but overall it is radical anarcho-syndicalism activism and direct action about taking a stand for what you believe in.”

His songwriting has progressed honestly out of activism.

“When I got into punk rock when I was 12 years old, Anti-Flag was one of the first bands I had ever heard,” he said. “Then I got into activism because of it, which only seemed natural for that to bleed over into our lyrical content once the band was started.”

Helm may be in a wheelchair, but he stands up strong regarding his principles.

“It means a lot to hear someone say that,” he said. “I grew up in a household where my father was quite racist, homophobic and misogynist. It showed me repeatedly, especially once I started listening to punk rock, who and what not to be, and deepened my convictions. “

In March 2021, Helm proved his convictions by confronting a man at a march in Calgary.

“The guy was marching around with over 2,000 people for three hours with a shirt that said ‘Proud white Christian nationalist’ with two iron crosses on it and a Canadian flag with a black hand reaching across it,” he said. “Nobody said a fucking thing to him, and nobody gave a fuck. They let him march beside them, and I can’t have it. When I see that symbology walking down the streets, there is no place for it, and if nobody is going to say something, then I guess it’s up to me.”

Helm also lent support in 2020 to a movement to have a Sir John A. Macdonald statue removed from a municipal property in the Township of Wilmot.

“I was living out there at the time, and that became an important issue for me because I believe that with anti-fascism, that means anti-colonialism as well,” he said.

Back Breaker has become an Alberta-Ontario band as Helm and his wife relocated to Calgary.

“We came out here just for some rehabilitation stuff,” he said. “My wife had never been out here and wanted to check the city out, so we decided to make a move and are currently living in Calgary.”

They are still undecided on whether the move will be permanent.

“We were planning to come back for July, but unfortunately, I ended up in the hospital with some issues due to my injury,” said Helm.

In a message posted on May 9 on the Back Breaker Facebook page explaining to fans in Ontario why summer concerts had to be postponed, he wrote, “Last week I ended up in the hospital under some pretty extreme circumstances. I have neglected taking care of myself these past months and ended up with an extremely infected set of pressure sores. I was septic, and I was dying. I was lucky I went to the hospital when I did; otherwise, I may not have made it through this. After a week of intense antibiotics and mass amounts of blood work, I’m still sitting in the hospital but now on the mend. I currently have two huge holes in my body where they had to cut out the dead and rotten (literally black) tissue, and I am waiting to hear when I’ll be discharged. I realize that first and foremost, I need to take care of myself and my health, or I am no good to anybody or anything else.”

Back Breaker has still been writing and making music even with the Alberta, Ontario separation.

There are plans to tour later this year and plans for a European tour in 2023 with Permanent Revolution from Brisbane, Australia.

“We have a lot of stuff we are planning and trying to branch out from local shows because me being across the country makes it hard,” said Helm.

Back Breaker’s current lineup has Erik Begg from Stand Against Fear and Wiggler playing drums.

“Oh yes, and he makes Sorry Sauce, which, if you haven’t tried that, I would recommend it,” said Helm. “He has some amazing hot sauces available.”

“Right now, on bass, we have my friend Ty from out here in Calgary who just joined the band,” said Helm.

Before signing off from the hospital in Calgary, where he is currently recuperating, he had a message to people to be active in their communities.

“Don’t just sit there and complain and talk about it,” said Helm. “Voting it away isn’t going to change it. Get out there and do something. Talk to people. Meet people and figure out how you can make connections and make a difference. It doesn’t have to be on a large scale either. Just go by yourself and talk to people in the street. Talk to the homeless people in your community. Meet them, figure out what types of things they are going through, and try to understand the other situations in your community that aren’t necessarily affecting you directly. Beyond that, keep doing what you are doing, live your life and have fun.” 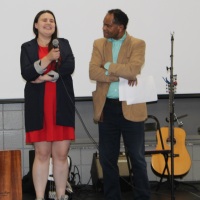 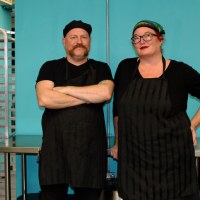 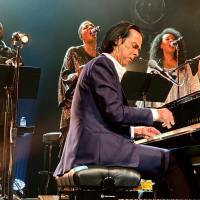 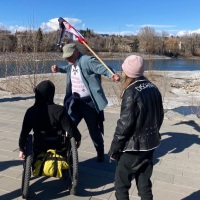